First off, leading up to the day, on a whim I decided to yarn-bomb my bike.  Hee hee. 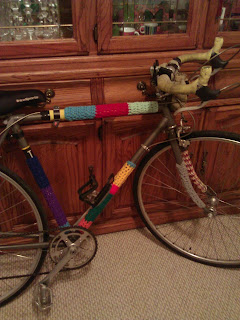 I definitely had a lot of compliments and comments on it today.  And they did not hinder my riding at all, so that was good.

I checked in last night, had a wonderful free dinner, watched the opening ceremony program, laughed and cried.  And got some seriously nice swag! 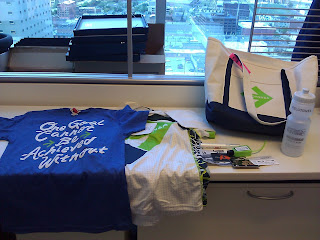 Ok, so the big day started at 4:30 this morning when I had to get up.  That was not easy, and I did not get quite the sleep I wanted but I figured I'd be too anxious to sleep well anyway.  I met up with my team for a team photo at 5:45 in front of our building, then headed over to line up.  We were to be there and ready to line up at 6:30.  There was breakfast and water and music and more fun.  First off, all these months of prepping myself for the ungodly heat we've been having and we had a sudden and drastic change in weather, thankfully.  It was very gray and COLD.  And windy as all heck.  I had to wear a long sleeved shirt under my racing shirt and long leggings.  While I was waiting the blustery wind was whipping around and I was downright shivering.  Which I was perfectly ok with.  There were 6200 riders signed up for this event making it the largest biking event in the country to date.  Here's just a few. 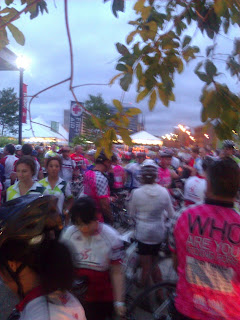 They had us in groups which make taking off SO much easier.  Since I was doing a shorter route I was one of the last groups to leave.  I rode the shortest distance of 25 miles.  The full ride is a 2 day ride doing 180 miles.  I'm not that good.  Those are some seriously badass folks.

The vibe was electric and everyone was in great spirits.  Since everyone else on my team was doing longer distances, I rode alone.  But alone with 6200 people is not alone!  I met some great folks along the ride and had a great time all over.

Had a rest at the halfway mark.  They had more food and water refilling stations and more music and of course port-a-johns.  Heh. 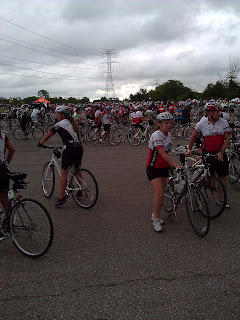 I sat back for a moment eating a snack and just watched the endless stream of bikes flowing in and out of the park where the rest stop was.  It was just breathtaking!

The route it self was not too bad.  The first 12 miles was easy, but the last 12 was really hilly and REALLY windy.  Made it tough riding.  But again I'll take wind over blazing heat any day.

I got to the finish and Bob Evans had real breakfast foods for us.  I ate up and hopped on the shuttle back to downtown.  I promptly fell asleep when I sat down, too.  Heh.  (Took a SERIOUS nap when I got home after a shower.)  Side note, the shuttle bus back was a bit....um.... odorous.  Heh.  Lot of sweaty folks in a small space for a long bus trip back.

Over all I was amazed at how well run the entire thing was and how many volunteers made it happen.  And all the people on the sides of the roads all along the way was so heartwarming.  I got choked up at all the signs and people thanking us for riding and all the names of people who had fought cancer.  I carried my own list with me along the way on the back of a photo of my godmother Sharon who we lost in March of 2008 to breast cancer.  I wish I could have taken more photos, but it was not very easy to get shots in when you're in such a big crowd, or riding a bike.  I'm sure there will be photos on the website in days to come.

I'll definitely do it again next year and maybe even ride further.  All over a wonderful and memorable experience without a doubt!
Posted by Theonlynikki at 5:08 PM