Shoulder harness on, hands in the air. I want off.

Well I promised a proper Wednesday WIPs and I did not deliver.  Smack me.  I am truly sorry folks.

It's time theonlynikki came clean with why I've been far beyond preoccupied lately.  The roller coaster has been non-stop for awhile now here and really kicked it up a notch this week.  So, theonlyboyfriend and I put an offer on a house.  I really didn't want to share anything until it was more official, but why not?  We're not in contract yet, and who knows if we will be or not.  Anything can happen at this point in the game.  But every single day has been waiting.  Waiting, waiting, waiting.  Waiting to hear if they accepted the offer, waiting to make a counter, waiting to hear, more waiting, figuring numbers and budgets.  Lots of fretting and hand-wringing, and second guessing and ulcers.  I've been a mess.  An absolute mess.

On top of all this, there is a close family member in crisis.  So for every jump-up-and-down moment, there's been one of complete and utter heartbreak.  Every time we utter "Well it can't possibly get any worse" it does.

I have been more or less completely unable to concentrate on anything.  Don't get me wrong I'm still getting stuff done and reading and getting hooky time in, but overall....I'm all jammed up into my head.

But so I'm not ending on a sour note, a couple great things.  Today is opening ceremonies for the world-wide 2012 Ravellenic Games!!  (formerly called the Ravalympics before the IOC came in and tried to sue this yarn-crafters social network for using "lympics" in our name.)  Yeah, in case you had any doubts, the IOC really ARE massive a-holes.  Not that we didn't know that before.  There was a whole mess when they sent their cease and desist, they said some very insulting things about folks who knit and crochet.  This crap made international news.  I get the copyright thing, but the name calling was totally unprofessional and just outright rude.  ANYWAY.... I'm using the Ravellenic games to crank out as many hats and scarves for charity as I possibly can!  so all my projects will be entered in Charity Rowing.  (Yeah we have clever names for all the events; Hat Dash, Lace Long jump, Scarf Hockey, Toy Toss, Cowl Jump.  Just to name a few of MANY.)  So that starts this afternoon here in the States.  Although I'm at work, so I can't really start until tonight.

And on another fun and happy note, I have a new man in my life and we are absolutely smitten with each other.  Wanna see him? 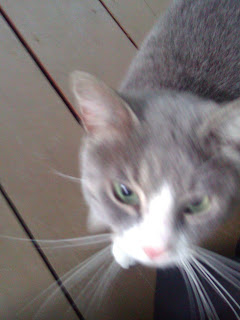 It's hard to get a clear photo, he won't stop snuggling me long enough to snap one.  He's waiting for me on my porch every morning now.  He's from a litter that was born in the alley behind us 2 summers ago.  It took this long to win his trust, but we're old buddies now.  And he recently starting bringing a friend along as well. 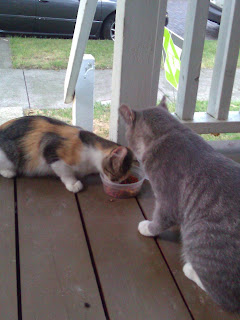 One of the kittens from the litter born in the alley this spring.  A very skittish little thing with GIANT golden eyes.  The kind that just melt your heart.  She still won't let anyone touch her yet, but she at least hangs out with us.  My little guy keeps trying to walk inside when I open the door, too.  I'd love to let him in but theonlycat does NOT tolerate visitors and I'm not sure he's had any shots.  I might nab him one morning and take him to my vet and get him all vaccinated and de-fleaed and looked over.  His ear is notched so I know he's fixed at least.  Same with the kitten.  The folks 3 doors down caught each and every kitten and had them all fixed.  Not an easy task, God bless them!

So that's live at theonly-household right now.  Chaotic at best, but hopefully some good things are on the horizon.  Fingers crossed.  Happy crafting and best of luck to my fellow Ravellenic competitors!!

Posted by Theonlynikki at 8:31 AM