Wow.  I feel like a big blob of lethargy.  But slightly relaxed at least.  I swear I did a whole lotta nothing this weekend.

Yesterday I did get up and go to my nephew's flag football game, so that was fun.  I love watching him play he has so much fun!  He got some more stickers for his flag belt, too!  They get stickers when they do something, I guess.  Kinda like merit badges.  They are a great group too, they're all about fun and not about winning or losing.  They rotate all the players so everyone gets to play in every game and they're so supportive and nice to the kids.  No yelling!!  It's refreshing to see a positive environment for kids in sports.

Anyway after that I came home and changed for another long bike ride!  I went about 16 miles this time.  I wanted to go further but I got to a part on the trail where it's closed for construction and got a little turned around trying to find a way around it.  My knee was starting to bother me so I just decided to head back.  All said and done I was out about 2 hours, too.  But there's a ton of stopping and starting before I get to the trail in town, and the trail section downtown went directly through the big Arts Festival that was going on this weekend.  D'OH!  So that whole part, I had to get off and walk my bike.  So I'm guessing I could have done it in less time with less crowds.  Had a minor spill when I got off the trail coming home, though.  Thankfully it was just a little ways from home and on my way back.  But I got some nasty road-rash on my knee and tore up my favorite workout pants.  Grrrr.  Cab driver was running a red light (huge shocker, I know) and I had to swerve to avoid him and kinda tipped over.  Jerk.  Could have been a LOT worse though.  (Yes mom I was wearing my helmet!!)

Then I came home and showered and just kinda laid around the house all afternoon.  Got some cleaning done but for the most part, just crocheted, read, and lazed about.

Then theonlyboyfriend and I went with our neighbors to see the most awesome drag show downtown.  Oh my goodness it was SOOOO much fun!  We saw Nina and Virginia West.  They are a blast.  If you ever can check out one of their shows, do!!

Sadly, we got home really late and I soon realized they poured the 2 drinks I had a bit stronger than I'm used to.  I think they forgot to add soda to the vodka.  I was not well at all this morning.  Heh.  Well and I think I've had a touch of a bug recently too because I felt kinda yucky yesterday during the day.  So I think it all hit me bad this morning.  So I did NOTHING all day today.  I didn't even get dressed until like 3.  That's not like me at all.  I feel all lethargic and cruddy now a bit.

But now it's evening and we're hanging out back with a little fire going.  It's a lovely evening!  All in all a lazy but kind of refreshing weekend.

Much love, I hope you are all well and had a fantastic weekend!! 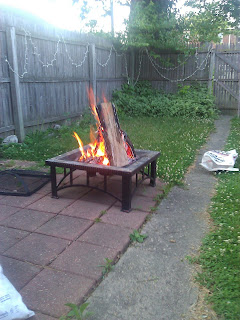 Posted by Theonlynikki at 8:35 PM