Well, we're here again.  Sadly I've only got one WIP going at the moment.  But I'm going to download a pattern here soon to start a new project this week.  My one WIP is the Tunisian scarf/cowl thing.  I haven't really put much work into it recently though so it's not much bigger.

HOWEVER!  I do have a very fun FO to show off.  So as you know theonlyboyfriend started a new job recently.  After his first day he said his cubicle was large and painfully empty.  So in trying to help him fill it, I made this little guy!! 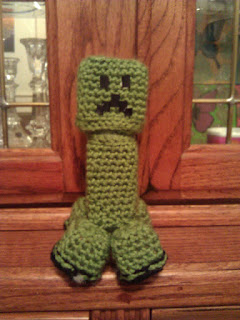 Ssssssssssss
For those of you looking at this and wondering what I'm smoking; this is a character from the game Minecraft, which has quickly become one of the world's most popular games.  Theonlyboyfriend is VERY into it.  So he was thrilled to get this Creeper.  (Creepers sneak up on you and make a kissing sound, then explode and kill you.  It's really weird)  Anyway once it was done I naturally had to chase the cat around with it hissing. 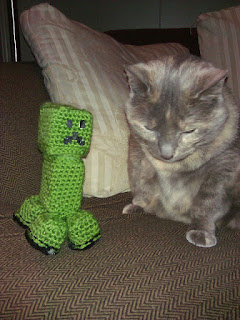 She was totally disinterested as usual
So that's about it for the crafting for right now.  I've got about a dozen projects in mind, so now I just need to start them!!  Hope everyone is well.
Posted by Theonlynikki at 11:52 AM