Happy Friday folks!  We made it through yet another week.  I guess that means it's time for a Friday Five, eh?  Well I think I can handle that.  I had a drop-dead-hilarious situation with my cat last night that inspired my list today.

5 things that prove my cat has more personality than most humans I know:


1) She hates Tom Jones.  Which sucks because I LOVE Tom Jones.  But it's true, whenever I play any music she gets SO excited and happy, she rubs all over me and meows along and purrs and dances.  But if it's Tom Jones...she growls and hisses and runs away.  She all out bit me once.  Hee hee.

2) She wants you to KNOW when she's mad at you.  She'll make a big fuss and commotion until you look at her and then she simply sits down and turns her back to you.  She peeks now and them to make sure you're looking at her and knowing she's ignoring you.  I think most cats do this though.

3) She has LOTS of opinions and lets you know them.  She hates bananas.  If she so much as SEES them in the house she looks at them and looks at me and hisses and stomps off.  If she sees anything she dislikes in the house, she'll either try her hardest to break or harm it in some ways or simply show you her disapproval.

4) She wants the neighbors to know we never feed or love her.  (which is obviously not true)  The sheer decibel levels this cat can reach with her meows is mind boggling.  If she's not fed or loved when SHE WANTS it, the entire neighborhood is aware.  Also, if we go upstairs (she's usually too fat and lazy to follow) she SWEARS we've fallen off the earth and she sill NEVER see us again, and also informs the surrounding areas of her peril.

5) She loves me more than anything in the world, she tolerates theonlyboyfriend and everyone else on the planet can go straight to heck.  But her affection can totally be bought.  It's true, she prefers sleeping under the covers with me purring loud enough to keep me awake all night, she follows me all over the house.  She'll sit in the same room as theonlyboyfriend, MAYBE near him.  Anyone else, gets hissed at and then she hides for the next 4 days.  But I promise if you give her food, or even BETTER, a stinky sock.... she's yours forever.  (The stinky sock was what finally won her affection with theonlyboyfriend)

She's huge, lazy, and moodier than anyone I've ever met.  But she is almost the most affectionate animal I've ever encountered.  And just look at this face: 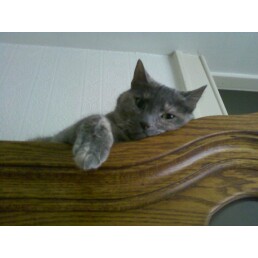 And just in case you doubt her size: 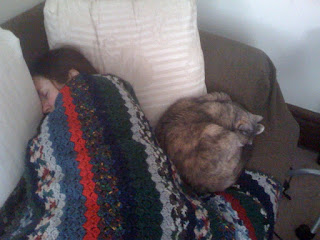 Here I am for comparison.  Buddies to the end. 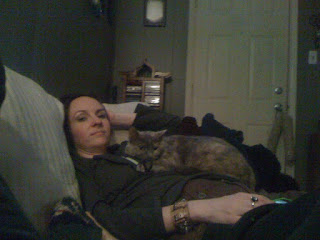 Ok, I guess that's it for my list this week.  I hope folks are well.  And happy weekend!!!
Posted by Theonlynikki at 9:27 AM