I know not everything I make can be a winner.  I accept that.  But it's frustrating nonetheless.  Especially when I've spent months on it.

So... the Cookie Monster Blanket.  It's done, but it's not at all what I had intended.  Let's just get the photo out of the way, shall we? 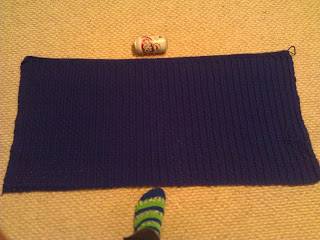 (Pop can and foot in for size comparison)
It was supposed to be square, and it's very much not.  I'm pretty frustrated and kind of annoyed.  I followed the pattern to the letter and this is what I got.  I don't know what the heck to do with this.  I'm embarrassed to call it a baby blanket.  It's too small for a Prayer Shawl.  About the only thing it could be would be a stroller cover.  (Someone on Ravelry suggested sewing up the sides and stuffing it and making it a pillow.  That's up in the air right now)  Or I could just tear the whole thing out, but THAT would be painful to my heart.  I loathe tearing things out.
Now I could go get another Caron One Pound and keep going.  But the whole point of this project was to use up what was in my stash.  Buying more would defeat that purpose and drag this out longer than I had intended.  UGH!
I finished the edge and sewed in the ends and put it away.  I'll figure something out later when I'm not so annoyed.  I hate this.
Posted by Theonlynikki at 8:21 PM

Email ThisBlogThis!Share to TwitterShare to FacebookShare to Pinterest
Labels: Crafts