Theonlycat is doing fine this morning.  Back to herself again, if still a little groggy.  I went to get her from the vet and she was still doped up and really out of it.  Poor little thing had no idea who I was or what was going on.  She just flopped her head around trying desperately to focus her eyes and growling and hissing at everything.  Took her home and had to sit with her until she was with it again, since she was staggering around falling over like a little fluffy drunken sailor.  I needed to make sure she didn't try to walk up stairs, drown herself in her water, or anything else.  I had to help the poor girl into her litter box.  But sure as anything first thing she did was look for her food bowl.  LOL.  I gave her mushy food and she gobbled it down like a drunkard at White Castle at 3AM.

All in all they pulled 3 teeth, so she's on antibiotics and pain meds for a few days.  The damages came to just under $700.  Not god awful but still...that's rent.  * sigh*

Anyway, the good news is, since I had to sit with her all evening I got some work done on my hats!  Finished the white one: 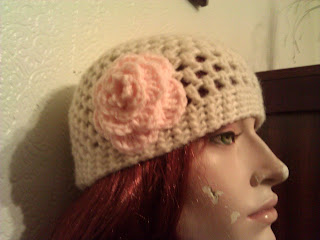 And got a good way through a blue one.  I just need to put the brim on and add a flower or some buttons.  I haven't decided yet.  :)

Love to you all!
Posted by Theonlynikki at 8:19 AM